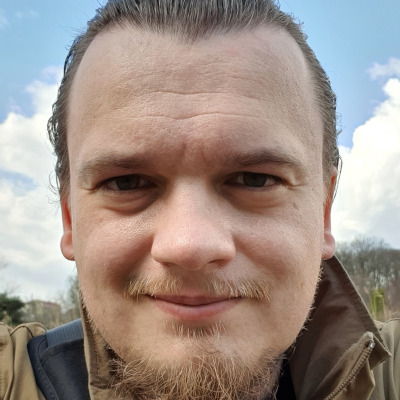 My experience in IT — continuously since 2002, professionally since 2009. It contains both software development (in many languages) and GNU/Linux administration.

Since 2013 I am expanding my expertise in the field of software quality, development automation and object oriented software design. I am constantly transferring this knowledge to others. I have also experience in designing and implementing software development environments and procedures.

Currently I spend a lot of time on issues generally referred to as Cloud Computing and DevOps.

Performing a talk Designing a CI/CD solution that processes a milion jobs each day at 15 Sesja Linuksowa — one of the Linux users conferences in Poland.

As an Rails Girls coach I was introducing three person team of girls into the world of programming and Ruby on Rails.

More informations about Rails Girls project you can find at http://railsgirls.com/.

November 6, 2013 I passed the exam and received certification at Foundation level of Prince2® project management methodology.

Completion of training for coaches in NGOs 11/2007 ZHP, Olsztyn

In October, 2007 I completed training for coaches in NGOs. The training was realised by ZHP — the largest and the oldest polish scouts organisation.

The training gave me a basic coaching knowledge and experience and prepared me to realise trainings at county level. From 2007 till now I have conducted many of training sessions and I  was involved in planning and organisation process of several large courses.

Since December 2015 I'm officially and formally, according to polish law, an owner of my own company: Tomasz Maczukin - IT Specialist.

License scanner and checker written in GO and designed to use with GO projects using /vendor directory.

Simple license file generator written in GO. Contains bundled licenses templates, but you can add you properiaty one in the configuration.

From April to December, 2015 I was a part of a development team involved in the process of refactorization and re-implementation of one of company's main business products.

Issues I was involved with:

Environment implemented with the employer. Particular configuration elements are unavailable due to provisions of the contract.

Environment implemented with the employer. Particular configuration elements are unavailable due to provisions of the contract.

The biggest Polish website about weather and with weather forecasts. I was involved in the entire process of designing and creating a new version of website in 2012.

You cant contact me via e-mail or one of my social networks accounts:

You can also use PGP/GPG encryption if you like. Also, when receiving an e-mail message from me or when checking my git commits, you can expect that they will be signed with my GPG key. I'm signing all my e-mails since 2012, and since February 2016 I'm signing all my git commits and git annotated tags (excluding those created on my behalf by GitLab, GitHub and similar software).

My GPG key can be downloaded from keyservers or directly from here: